The Spectacle that is Laddakh! - Gettin Leh'd! (Day 2)

1. Day 2- 12 June 2011 ( Manali to Darcha 138Kms)  Second day, we were advised by the Hotel staff to leave as early as possible to reach Rohtang pass as he feared  that it was the peak tourist season and there would be kms long traffic on the route. So, without having much required rest, we both woke up at around  0330 hrs only to find that it was raining heavily. It was an unexpected rain and it continued till 0800 hrs in the morning. So, on the brighter side we had that much needed rest. At break fast, we were cautioned by the staff again about the condition of the road after the rain. Apparently the road to Rohtang was a mix of black tarmac and rubble ( kachcha track). The rubble part now would have gotten absolutely muddy. Anyways, we started our ride by around 1000 hrs that day. We intended to reach Sarchu which was around 220 kms. The moment we left Manali, the landscape around us started to change dramatically and before we knew we were riding in an absolute dream. I couldnt help but stopping frequently to click pictures and record videos. Abhinav on the other hand was'nt much of a camera friendly guy, so he continued ahead of me. Within an hour of our ride we both got separated.What made matter worst was that there was no mobile coverage in that area. Regardless of that we both continued and finally met at Rohtang Pass. As we expected, there was a long queue of four wheelers before Rohtang Pass. We somehow managed to squeeze through them and through the mud and slush all over the road. Rohtang was as beautifull as we had heard. Summers had cleared the snow from the roads but there was snow all around  it was a sight to behold. All the effort and  hardwork was paid off with just a view of that place! 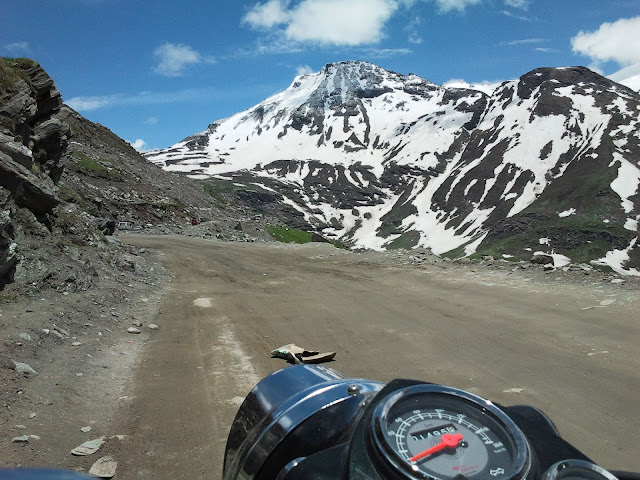 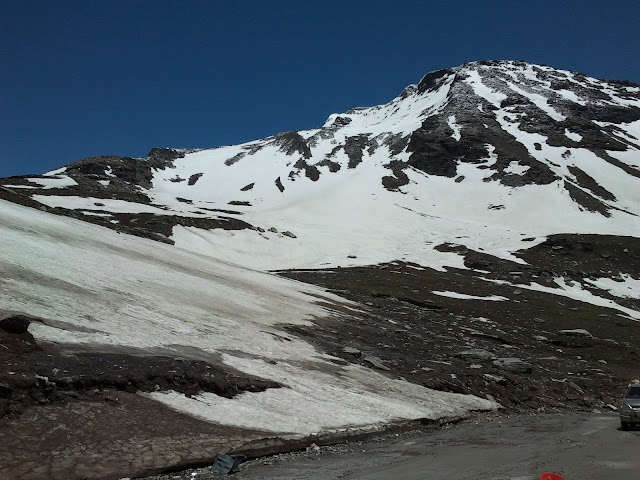 ALSO READ:
1. The Spectacle that is Laddakh (The beckoning)
2. A Beginner's Guide To Travel.
3. Traveller Deepak- The Opener
Posted by Unknown at 22:57

Email ThisBlogThis!Share to TwitterShare to FacebookShare to Pinterest
Labels: Getting Leh'd, How to prepare for the Laddkah bike trip, Laddakh bike trip